An 8-week archetype coaching program for strong men to get stronger by finding, being valued for and surviving their purpose. On this journey they will learn to tap internal strength, navigate or avoid a crash, and be a part of creating a difference in the world to their potential without having to go at any pace but their own.

How King Heroes Become an Even More Powerful Force For Humanity, While Creating Meaning, Purpose and Emotional Mastery Using a Simple Archetype Map

And How Not Doing This Nearly Cost Me My Life 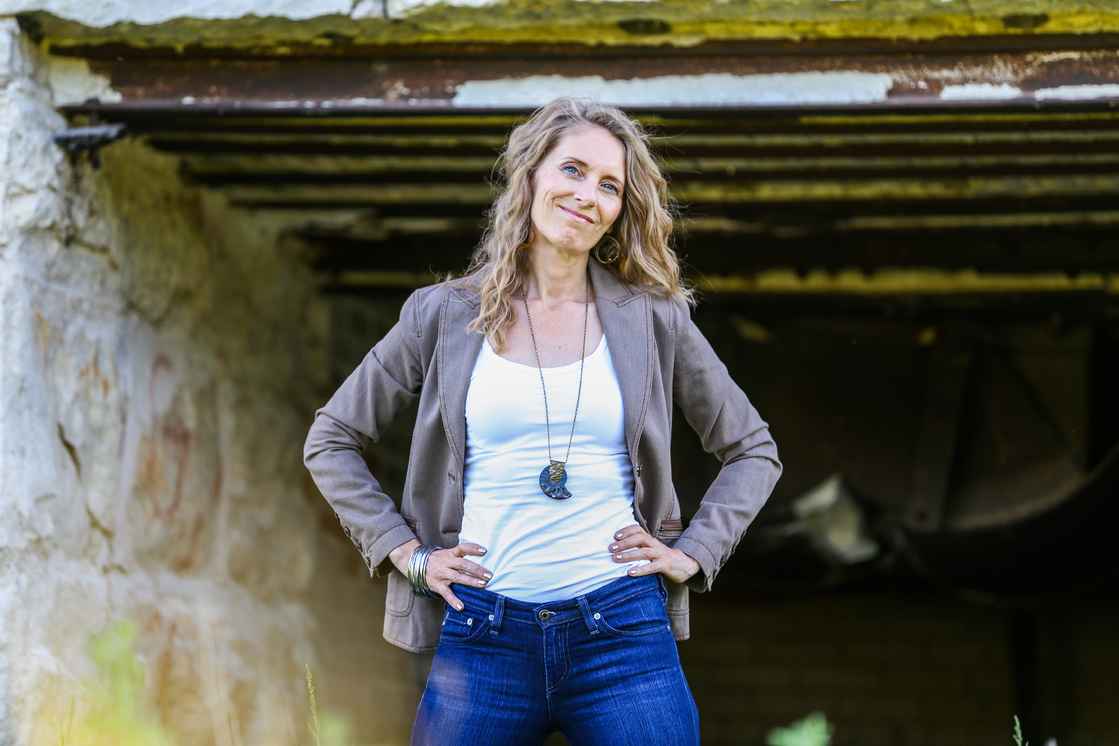 My oncologist nodded his head and began to walk away. Just months earlier he told me I wouldn't survive.

There I was in the very same treatment rooms at the Health Sciences Centre where I’d sat for nearly 300 hours in 3 years, receiving chemo.

But this time I wasn’t taking chemo, I was singing and playing guitar for an ‘Artists in Healthcare’ program I’d been hired for.

It looked like he didn’t recognize me, so I went running after him and said, “Hey Dr. R., it’s me, Beth Martens!”

He looked at me vacantly.

He wasn’t happy to see me. And he didn’t seem the least bit interested how I survived against the odds and without following his advice.

He didn’t ask me a single question. Not ‘how are you?’, never mind, ‘How on earth did you survive?’

I quickly realized there was no point in telling him how I discovered archetypes and the secret of living from my true instincts, from love instead of fear.

Instead I went back to singing and doing my job to help those hooked up to their IV’s have a less shit day.

He ended his life a few years later, and I can’t even begin to imagine how painful his work must have been.

Just six months earlier I heard the words I didn’t want to hear, but that saved my soul.

“Your cancer is back.” I knew it long before tests showed it.

“According to the stats you’re not going to survive this. Your only chance to live is a stem cell transplant…”

The stats also said that half those who received a stem cell transplant die. And it took a year to even begin recovering. (I watched my son’s uncle die this way many years later).

Some would say it was a no-brainer to go with half a chance to live.

But under what condition??? A ‘NO’ bomb went off in my head.

With this bleak news I was called to dig deeper in myself than I’d thought I could dig. It was the first time in my life that I tapped into my true instincts.

I went into an around-the-clock inward journey to make the decision about whether I should accept their “treatment” or face my death.

Working with archetypes saved my life.

I had been doing everything possible, you name it, natural, conventional, psychological, scientific, alternative…I went for it. But I was still losing my life.

It wasn't until I began to work with archetypes that I could see what was draining the life from me. And I decided with a very strong resolve to stop it.

I instantly made my decision.

It was crystal clear to me what to do, because I saw my instincts for what they really were. A deep love for life, for my unique mission on earth, and for myself.

No matter what the outcome, if I lived or died, I faced my mortality and fears head on. And I began to recover, that very moment.

My oncologist and my family thought I was stupid for refusing a stem cell transplant. I would get calls at 4 AM telling me they were terrified, that I was committing suicide.

But instincts don't speak in fear.

Are you a King Hero?

It's a word I created because there wasn't one, to describe the amazing people in my community.

If King Heroes had the support they needed to follow their purpose with conviction, they would be able to sustain the responsibility while being a force for keeping family, community and truth in tact. 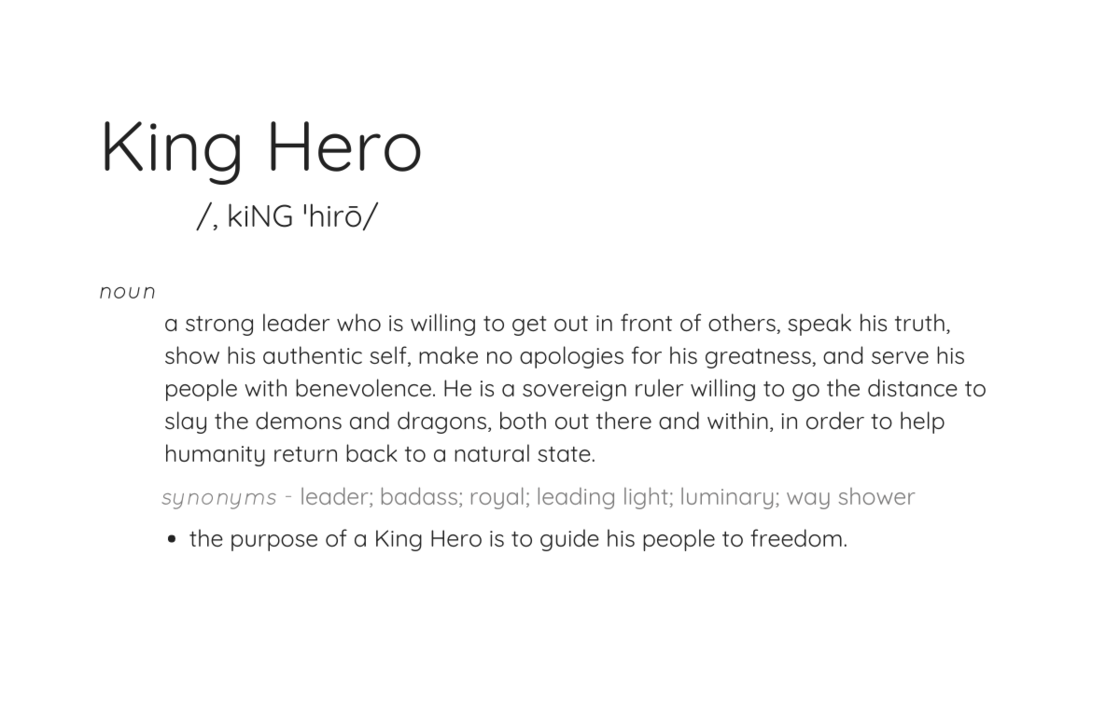 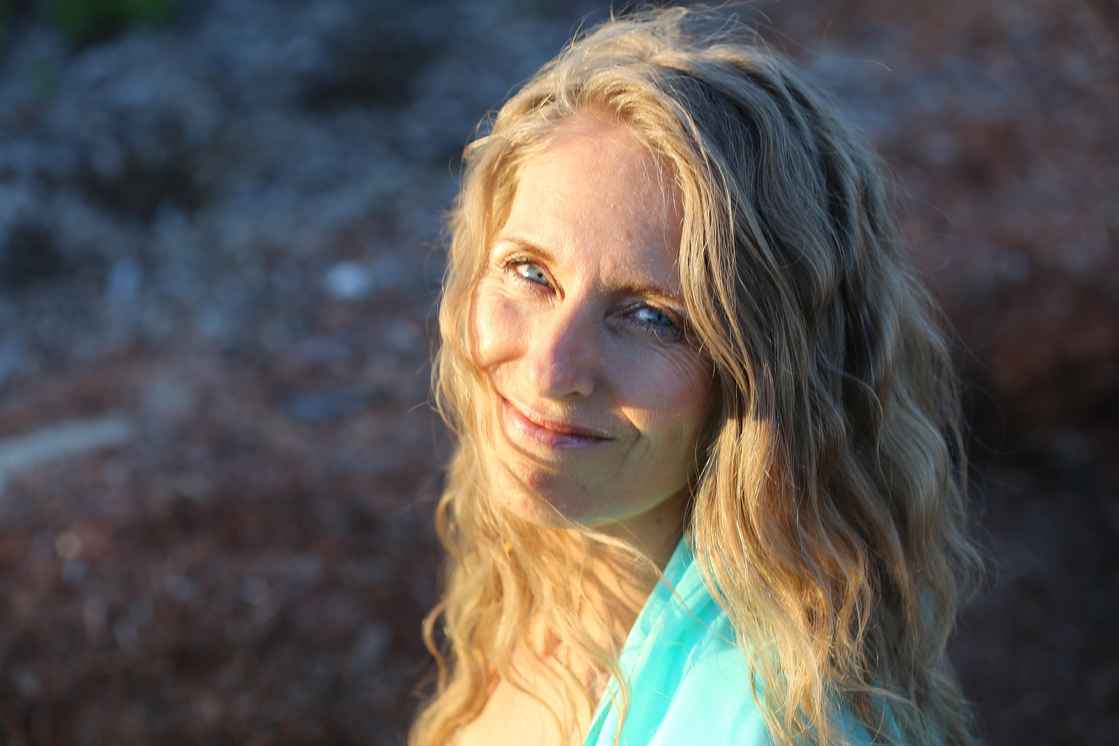 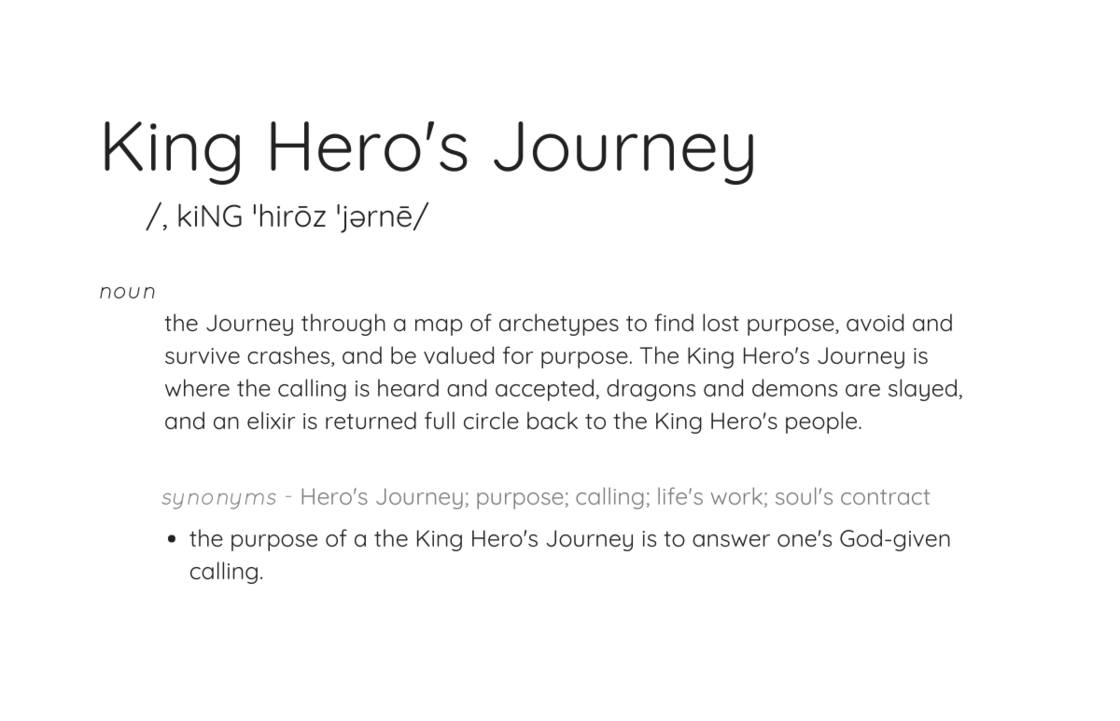 This is perfect for you if you are…

Results you will experience…

By pinpointing shadows — blindspots where you’re unable to see your motives, actions and results -- you can see clearly the exact source of an energy loss.

Once you identify an archetype at play in your negative patterns, tensions, or struggles, you are a million miles ahead on the path of fixing what’s “broken.”

But nothing is really broken, it’s merely hidden.

Archetype patterns provide inner threads to track and uncover hidden self-knowledge. It means that rather than having to face the inner world as a wall of formidable and overwhelming thoughts, feelings, and senses, it can be practically and meaningfully sorted it out.

Archetypes are a blueprint or map of the inner human experience. They are a fixed plan or container — for inspiration, thoughts, feelings, sensations, actions, and life itself to flow through. In the same way that DNA hold physical potential, the archetypes hold emotional and spiritual potential.

The purpose of pinpointing and working with them is to simplify the inward journey to become self-aware, to be the master of the experience, and to stop feeling at the mercy of these patterns. It becomes a fast road to heal, have what is wanted and needed, and to create what is in each one to be created.

Creating from purpose, rather than just consuming what’s being fed, is what humanity needs, now more than ever.

The 8 King Hero Archetypes - A Map of Lost Purpose 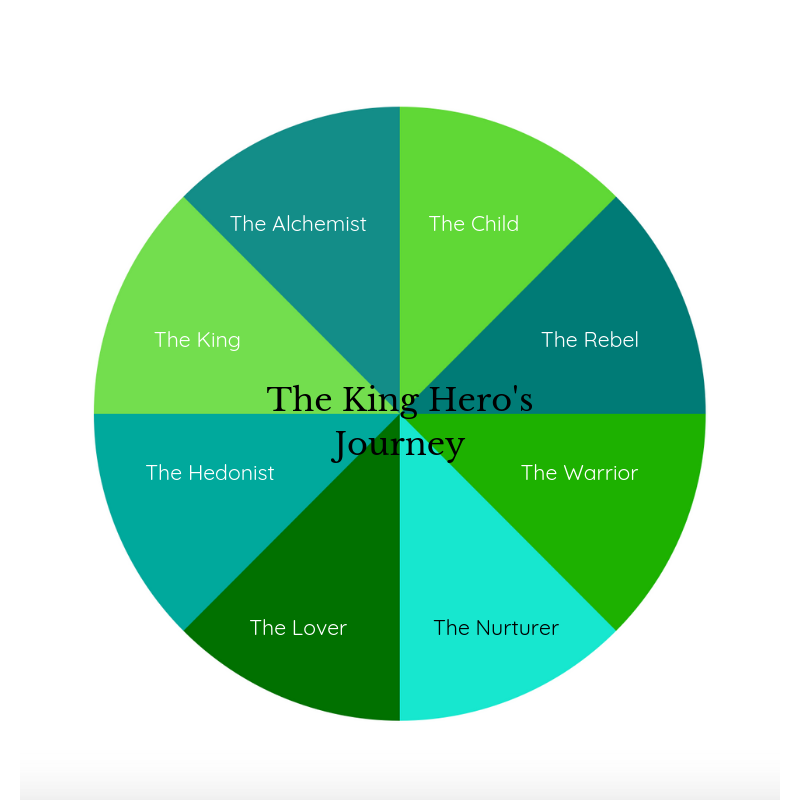 Accepting the call (or next level), facing the fears or sense of being lost, and resolving to get out of denial and into action.

Taking up the cause and learning to fight for your right things and facing the weaknesses of boredom, resistance to doing the inner work, and coming to terms with leadership.

Learning to manage the inner demons and dragons, how to have discipline and conserve energy for the righteous battles, and building the necessary structures to become a champion for the freedom of self and others.

Creating the necessary boundaries to help and support others from a healthy place that doesn’t cost you your quality of happiness, health and relationships.

Becoming intimate with the soul’s desires, deepening into what is needed to be done to manifest your unique truth in the world, and letting go of the need for perfectionism, obsession and compulsivity in order to create in your image.

How to fill your life with healthy pleasure, understanding intimate relationships, gain the ability to withstand or remedy addiction, establish your own divine connection, and find the pleasure of purpose.

Learning to take on greater freedom, responsibility, and leadership on behalf of others and overcoming the hunger for power in the name of serving, leading movements and building to-your-scale empires for the greater good.

Deep healing from past trauma, pulling together the pieces of self into an integrated whole, having clarity about your gifts, doing little and producing a lot by cracking the code of working with energy, getting established in your values of social justice, and turning your sage wisdom into an instrument of ultimately returning humanity back to a natural state. 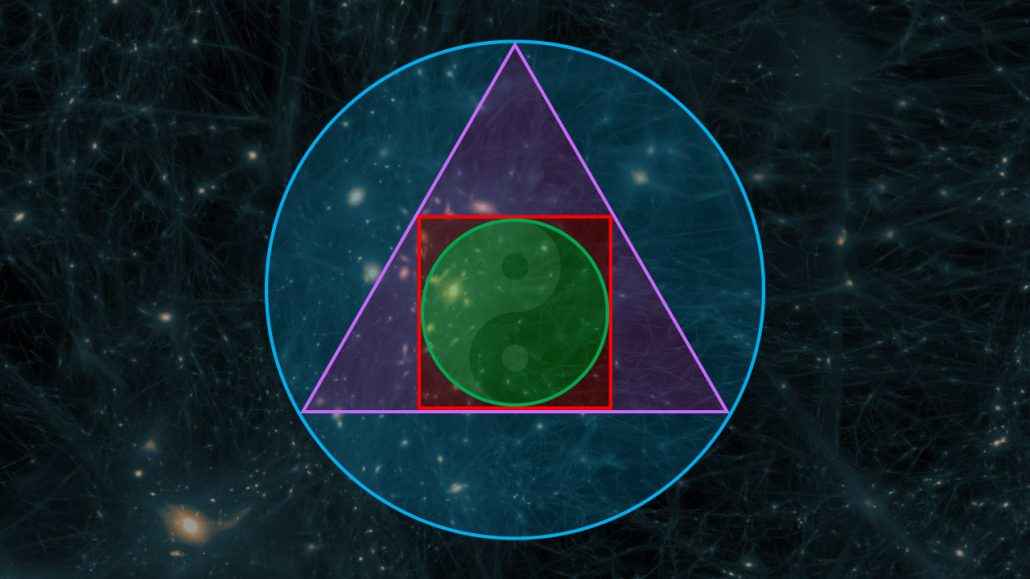 The above archetypes follow the natural order of the Hero's Journey as originally mapped out by Joseph Campbell.

Following them in order will take you through the gifts and challenges of each phase so you can slay the demons that stop you from following your calling and bringing your elixirs back to your people.

In the process you will discover lost meaning, purpose, connection, and your sense of personal power.

Every week you will get a new module on each of the archetypes including 4 audios, a PDF workbook and archetype card.

In the audios you will learn the gifts and shadows of the featured archetype, how to manifest through it, how to navigate business and branding challenges and how to release the unwanted thoughts, feelings and beliefs around it.

By answering the key questions in the workbook you will be lead to uncover and let go of unwanted shadows, and then create actionable steps for having breakthroughs in business, health, relationships and leadership.

Make money sacred with a reading of your specific Sacred Money Archetypes and a group discussion to get past any blocks you might have with money before you embark on the King Hero's Journey, so you have a clear and open attitude towards making sacred money.

Have breakthrough's on the 4 archetypes that everyone on earth shares, that keep us feeling on the edge of life and death, that cause us to make choices that are out of alignment with us, that make us feel powerless and unable to affect change and that cause us to sabotage everything that's important we've worked for.

Downloads you can use over and over Including:

1. Your Ideal Niche Worksheets - Create or refine the audience of your work so you can speak right to them when you market your service.

2. Signature System Worksheets - Design step-by-step systems from your passions, talents, experience and trainings that get specific and tangible results for your ideal client.

4. Sales 'Discovery' Script - Turns sales calls into intimate and transforming conversations about what your potential client really cares about.

5. Signature Story Template - A fill-in-the-blank template for creating your signature talk, your personal mythology that leads to people wanting to work with you.

3 Ways to Do the King Hero’s Journey

If you have others, please send them in the form below:

How fast do I have to do this program?

You can go at your own pace, though modules come to you every week. Some of the archetypes may be more of a discovery than others.

How long do I have access to the materials?

Do I need to know about archetypes to do this work?

Not at all. Archetypes are something every person knows, even if they haven't given it any conscious thought. Willingness to look inward and to do what it takes to have breakthroughs are necessary to get results.

How much time does it take?

If you devote at least a couple of hours a week to this study you will get results. That includes listening to audios, answering workbook questions and creating new action steps for yourself.

What if I decide I want personal coaching after doing the DIY program?

What is the "work" during the 8 week program?

First you will listen to the audios and then answer key questions in the workbooks that will give you insight about where you have shadows/blindspots. Then you are guided to create action steps that are in line with what your goals are in purpose health, career, finances, relationships and other areas of your life so you can make needed changes in your life.

Ready to get started?

Any questions about getting on this Journey?

Let me know a bit about where you're at and any questions you might have and I'll get right back to you.